For millennia, wolves have occupied nearly all the lands now designated as Wilderness in the western US, with the exception of coastal California. Yet today, fewer than two score of the approximately 540 Wilderness

Arguably, the long-term sustainability of wolves in other federal Wilderness areas is at risk due to the limited security provided by those smaller, often isolated landscapes.

The Wilderness Act of 1964 defines Wilderness as a place where the earth and its community of life are untrammeled by humankind, retains its primeval character and where natural conditions are preserved. Simply stated, Wilderness is meant to exist with minimal human interference. Yet within the vast majority of Wilderness areas, the wolf, the native apex wildlife species with profound ecosystem influence, is now absent—an absence due entirely to the relentless killing by humankind.

We need look no farther than Yellowstone National Park to witness the influence wolves have on an ecosystem. The park’s wolves were exterminated by the third decade of the 20th century, ostensibly to protect the park’s favored elk herds. What followed was not surprising—an overabundance of elk which led to deleterious impacts to vegetation, particularly lower elevation riparian and willow communities.

Since the reintroduction of wolves to the park in the mid-1990s, elk numbers have dropped to levels most ecologists agree resemble something near carrying capacity. Similarly, park wolf numbers stabilized around 100, after initial highs of between 150 and 170. With the wolf’s return, the park ecosystem is showing signs of reaching a dynamic equilibrium beneficial to all components. It’s not an exaggeration to say that wolves were instrumental in returning the park’s wildlands nearer to their primeval conditions.

Wolves hold apex status, in part, because of their far-ranging hunting behavior. Yellowstone-area wolf packs hunt in territories ranging from 185 and 310 square miles. Now, besides being smaller, the Yellowstone elk herd is more dispersed and spends less time in the lower elevation meadows and riparian-willow communities.

Most ecologists agree that the wolf’s collective impact on elk is contributing to the resurgence of the willow communities, which in turn is witnessing an increase in avian biodiversity and density. The revitalization of Yellowstone’s northern range willow communities, the region where elk numbers dropped the most has also seen an increase in the beaver population, leading to positive changes to stream ecology, thereby benefitting aquatic invertebrates and the fisheries.

Many of the ecological changes brought about by the wolf’s return may take years if not decades to recognize and fully understand. But one thing is clear, today’s Yellowstone and the Wildernesses harboring robust wolf populations more closely resemble their primeval character than those lacking wolves. Wolves may just be nature’s best wilderness stewards. 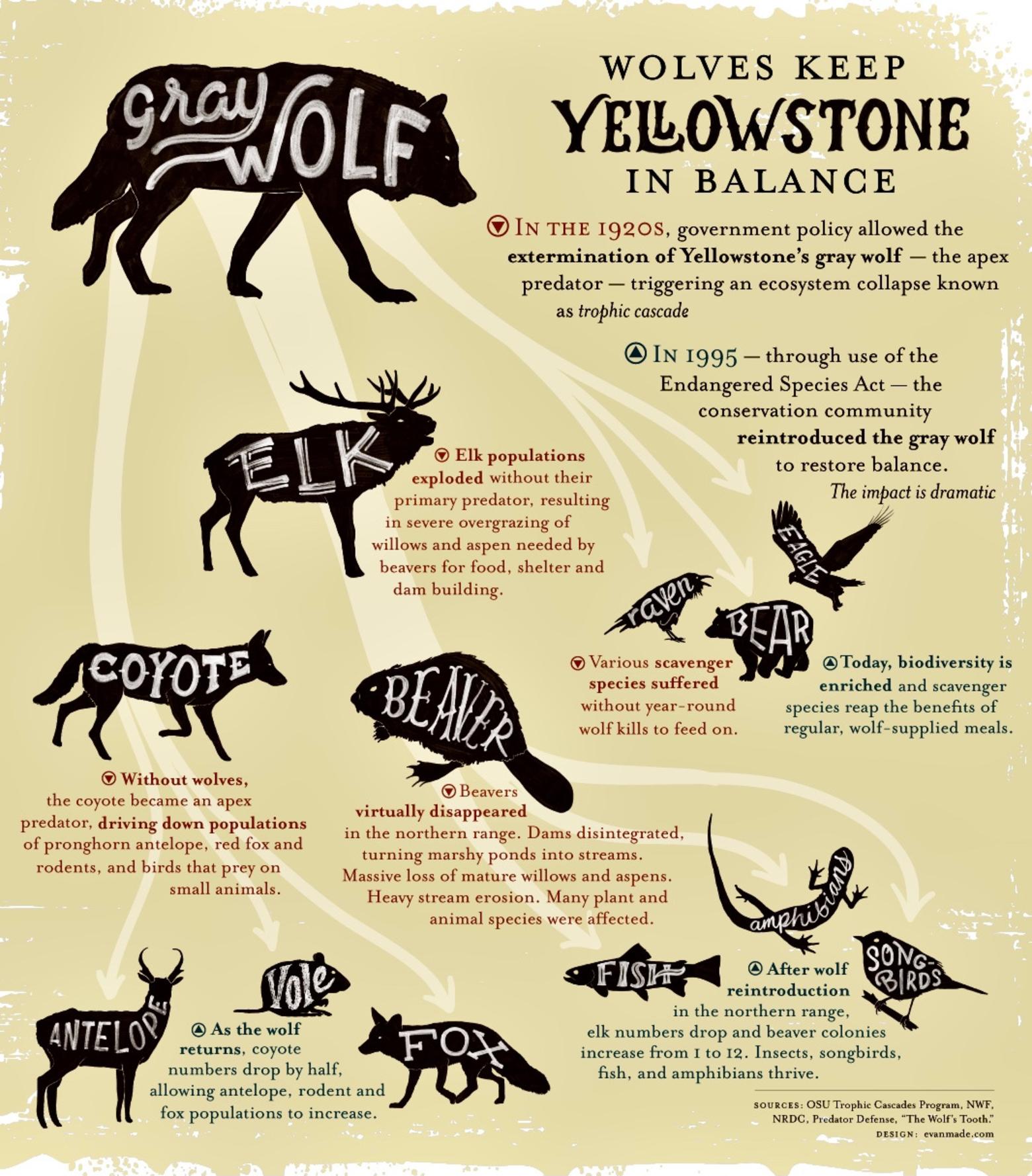 Three states now account for the majority of the West’s wolves: Idaho (1,556), Montana (1,220) and Wyoming (347). Another 351 are tallied for Washington (178) and Oregon (173). Mexican Gray Wolves occur in two states: New Mexico (114) and Arizona (72). Combined, approximately 3,660 wolves currently reside west of the 100th meridian—a number that pales to the 250,000 to two million estimated to have resided in the entire United States before the European invasion. However, the current numbers are better than the few dozen residing in northwest Montana three decades ago, which were a result of wolves immigrating from Canada.

In a promising move, a recently-passed ballot initiative in Colorado directs state wildlife officials to formulate a plan to reintroduce wolves to elk-rich western Colorado by December 2023. The region is made up of vast public lands encompassing the Central Rockies and anchored by Rocky Mountain National Park, over a dozen wilderness areas and at least eight National Forests. In total, the landmass approaches the size of the Greater Yellowstone Ecosystem and promises to be home to hundreds of wolves once the reintroduction effort is completed and wolves have repopulating their ancestral home lands.

Today’s bad news is that wolves in Idaho and Montana are once again facing the vigilante actions of the 1800s. Both state legislatures recently passed draconian legislation with the stated objective of reducing wolf numbers to near 150—the number at which the U.S. Fish and Wildlife Service will take over wolf management as per the states’ wolf management agreements in effect since Endangered Species Act protections were taken away from wolves.

The new legislation authorizes the state commissions to allow wolf-killing by pretty much any means imaginable: the use of traps and snares, unlimited quotas, extended hunting and trapping seasons, and in Idaho, night time hunting, aerial gunning and killing pups in dens. Idaho also designated $200,000 to “cover expenses incurred” by private individuals while killing wolves—essentially imposing a bounty on wolves.

The new legislation authorizes the state commissions to allow wolf-killing by pretty much any means imaginable: the use of traps and snares, unlimited quotas, extended hunting and trapping seasons, and in Idaho, night time hunting, aerial gunning and killing pups in dens. Idaho also designated $200,000 to “cover expenses incurred” by private individuals while killing wolves—essentially imposing a bounty on wolves.

(Editor’s Note about photo below. Recent legislative action in Idaho and Montana has liberalized the killing of wolves in both states. Prior to this, both states had tough laws on the books aimed at punishing poachers and insuring that the killing of wolves was done according to established fair chase principles as spelled out by the Boone & Crockett Club. In a press release related to an incident that happened before recent controversial laws were put in place in Idaho and Montana, the law enforcement division of the Idaho Fish and Game Department posted the following information and photo of the suspect with a wolf on its public web page. The text written by Idaho Fish and Game reads, verbatim: “On September 06, 2016, [non-resident Robert] Koester was issued 28 citations for the unlawful take of the wolf, possession of the unlawfully taken wolf, hunting without a valid tag, the unlawful take of a bull elk, and for purchasing wrong class licenses for 5 years. As part of a plea deal in Lemhi County, Koester pleaded guilty to 5 counts of purchasing the wrong class of license. Koester was sentenced to 900 days of jail, with 850 of those suspended, two years’ probation, 3 years of loss of his hunting and fishing privileges, 16 hours of community service, and a total of $6451.60 in fines and penalties. That amount includes the civil penalties for the wolf and the elk as well as $4017 in restitution for the wrong class licenses.” Mountain Journal is sharing this case as an example to serve as a contrast of how wolf killing was approached a half decade ago versus today). 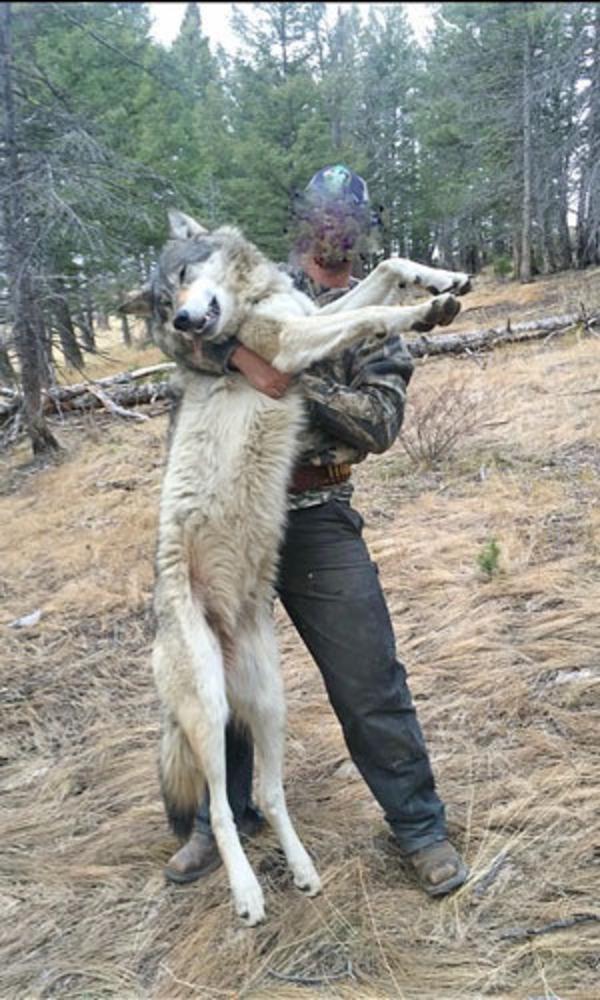 Idaho’s and Montana’s aggressive wolf-killing legislation has been temporarily dampened a bit by the states’ wildlife commissions which have some leeway when setting annual wolf hunting and trapping regulations. For instance, this season Montana is limiting the open-ended quotas written into their legislation. But the intent and goals remain unchanged—it may just take a few more years to achieve those goals. Ironically, that means more wolves will be killed because each year the survivors will produce young, thus replenishing their numbers, resulting in “a need” to kill more wolves to reach the 150 goal.

Add to this the illegal killing of wolves by individuals hell-bent on ridding the land of all wolves as was the case of the heinous and immoral poisoning of an entire pack of wolves this past spring in Oregon.

The number of other wolves illegally killed can only be estimated, but studies have suggested upwards of 10 to 20 percent a population may die at the hands of poachers annually. Poaching threatens all wolf populations but hits particularly hard in the smaller outlier wolf populations giving reason to worry about the long-term sustainability of the small, isolated populations currently residing in eastern Oregon, northern California, Washington state and Arizona and New Mexico.  Recently, a Mexican wolf was illegally killed in natural areas outside of Flagstaff, Arizona.

State wildlife agencies manage wolves by the numbers, ignoring the fact that wolves are one of the most social species on the planet, and function and survive not as individuals, but as members of highly structured packs. Consequently, intense, random killing can cause packs to break up, resulting in diminished hunting efficiency and pushing wolves toward easier prey, such as livestock.

Today, wolves and the wilderness ecosystems they inhabit are imminently threatened by these irresponsible state efforts to kill upwards of 90 percent of their wolf populations, including within Wilderness. A weakened or removed apex species inevitably results in a weakened ecological system. If this barbaric killing is allowed to proceed, ecosystem function and wilderness protection will be pushed back decades.

Wilderness Watch, where I sit on the board of directors, continues to fight for Wilderness and its wolves, and, along with EarthJustice, filed a 60-day Notice of Intent to sue Idaho and Montana for their new barbaric anti-wolf statues. We’ve petitioned the U.S. Department of Agriculture to promulgate rules or issue closure orders preventing certain killing methods, hired killers, and paying bounties in Wilderness. Wilderness Watch also joined a petition authored by Western Watersheds Project to re-list wolves under the Endangered Species Act in light of the new, aggressive state wolf-killing statutes. In response, the U.S. Fish and Wildlife Service announced that it will undertake a status review of the gray wolf over the next 12 months.

A Wilderness denied of its wolves is a wounded Wilderness. If wolves can’t be allowed live in Wilderness, where can they live? Wilderness Watch will continue to do all it can to protect this critical, symbiotic relationship and the ecological integrity of Wilderness itself.